You are here: Home / Self-Injurious Behavior 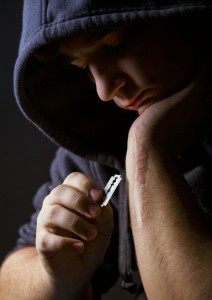 Self-injurious behavior involves some form of deliberately harming your body. It’s  usually an unhealthy way to express painful emotions, frustration, or anger. It often involves cutting or burning oneself. It can be linked to a variety of mental disorders including depression and eating disorders. Therapy is an effective way to discover the origins of these harmful impulses and to find healthy ways to express them.

Self-harm tends to be more common in teens and in early adult years. Many people who engage in self-injurious behavior often do it a few times. Others however, have trouble stopping.

People typically engage in such behavior as a way to cope with a problem or to gain a sense of relief. Some will say that they hurt themselves to stop the feeling of being lonely, angry, or hopeless.